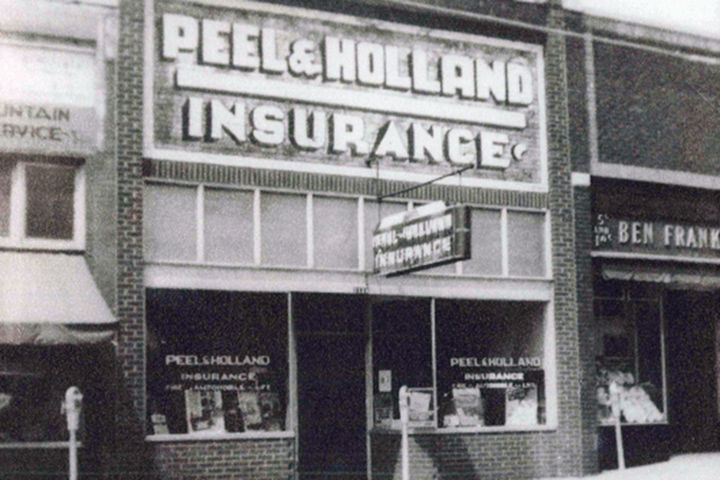 We are so very proud to be a part of the Peel & Holland family of insurance agencies. Their reputation is impeccable, with a rich history of simply taking care of the people they serve with integrity. To think that Hartin Dynamics is now part of this 95+ year old legacy is an honor.

Peel & Holland, Inc. was founded in 1924 in rural western Kentucky by Dwight Peel. In the late 1940’s, Woodrow Holland joined the agency as a partner and the name became “Peel & Holland” as it is still know by today.

After Mr. Peel’s death, Charles “Tot” Jackson became a partner in Peel & Holland in the 1950’s. Mr. Holland and Mr. Jackson were the sole partners until R.C. Riley joined the firm in 1965 and launched his tenure which led the company’s growth through the next three decades. Mr. Riley earned the Chartered Property and Casualty Underwriter (CPCU) professional designation in 1973 and the Accredited Advisor in Insurance (AAI) in 1989. Having served as President of the Independent Insurance Agents of Kentucky in 1978, R.C. received their highest agents’ recognition award, Insuror of the Year in 1979. Following several years of leadership positions in the Independent Insurance Agents of America, R.C. was elected its President in 1991. To honor his distinguished service to the association and the independent agency system, in 1994 IIAA presented R.C. with its highest tribute, the Woodworth Memorial Award. Moreover, R.C. has been on the Board of Trustees of the American Institute for Chartered Property and Casualty Underwriters.

Pat Hurley soon after joined the business to oversee the real estate business, and he became a partner in the firm. Peel & Holland’s partners remained Mr. Holland, Mr. Jackson, Mr. Hurley, and Mr. Riley throughout the 1970s. Mr. Holland retired just prior to 1980, and Mr. Jackson retired in 1984. By this time, Lloyd “Brad” Colson had become an owner, and the firm had “incorporated,” becoming Peel & Holland, Inc.

In 2005, Mr. Riley retired from the organization after 40 years of service, leaving the business in the capable hands of his two sons, Roy Riley and Keith Riley, who both currently serve as executives of Peel & Holland, keeping the long standing traditions of excellence alive today.

« The CFO’s Impact on Employee Benefits
You Might Ask Yourself, What Can I Do about the Cost of Healthcare Benefits? »